We were going to Germany anyway, for a bicycle trip.  How could we skip Berlin? Chock full of recent, relevant history, capital of a country at the crossroads of modern economic and political trends, well served by public transport; described by a former mayor as “poor but sexy”  — we went there near the end of August. 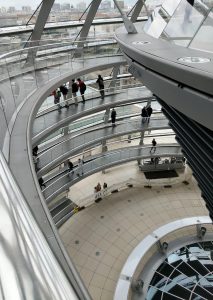 Confronted with a new metropolis, we usually spend most of our time just gawking at buildings from the outside. Berlin is an unusual case when it comes to architecture. For one thing, it’s a new city: the Middle Ages were nearly over before anybody gave much thought to living here. Later, much of the city was destroyed in the Second World War.  After that, there was a lot of real estate without clear ownership, coexisting with great swaths of utilitarian Communist housing. Finally, the disappearance of the Wall left oddly-shaped open spaces.

One smart thing we did was to get the folks from Berlin on Bike to take us around. Our first guide, André Franke, a city planner by trade, showed us a lot of neat stuff that we would have missed otherwise. Then we spent part of another day mostly looking at historical sites.

If you sign up for the tour of the Reichstag, they let you climb up the spiral ramp, all the way to the top of the new see-through dome. The symbolism of this feature is pretty powerful: the populace is explicitly superior to their legislature, and transparency is paramount. Active climate control is built in, too. Plus, the view is pretty good.

For the very best view, we had  a late lunch on another day at the Fernsehturm, East Berlin’s answer to the Space Needle. The reservation is the way to skip the ticket lines and guarantee yourself a good seat, and we found their gluten-free choices online before signing up. In this picture, our hotel would appear near the upper right hand corner:

From near that point, the path of the former “Anti-Fascist Protection Rampart” (billed as keeping out freeloading capitalists) heads across the top of the picture and then just this side of the big green wooded area on the left, the Tiergarten.  West Berlin lay beyond there, as far as Spandau but not so far as Falkensee, bounded by more of East Germany. Today, wherever the route of the wall is not otherwise obscured, it is marked on the ground by a course of bricks set lengthwise in a band of cobblestones.  The Mauerpark, near our hotel, recreates a segment of the Wall’s environment.

In addition to the visible, linear, open-air trace of the former Wall, there are two essential concentrations of historical material.  The first of these is called “Topography of Terror.”  Purpose-built on the site of the original SS headquarters, it’s not just a museum but a “documentation center.” Modern Germany became the country that it is by coming to terms with its past, rather than trying to deny it as another nation might hope to do. It has done so in meticulous detail. The lives and careers of particular figures are carefully documented, alongside official actions and broad social currents.  We are reminded that only when judging the Third Reich did the world first begin to hold individuals accountable for the atrocities of war and genocide. Close by is a monument different in nearly every way, the 4.7 acre Memorial to the Murdered Jews of Europe. This is a place of art instead of analysis, evocative rather than referential.

Hatred of Fascism was intense after the war, and suspicion in East Germany was particularly slow to abate. Those who had fought to defend Marxism were not going to take any chances. The second great repository of totalitarian memorabilia is in the actual former STASI headquarters, near Frankfurter Allee in Lichtenberg. Records and paraphernalia are preserved and displayed here too.  The eavesdropping devices seem quaint, but the methods of coercion have changed little — a target was led to do something wrong, through blackmail or bribery (maybe a chance to get needed medicine or to aid a relative); once the line had been crossed, an informant could protect himself or herself only by continuing to betray others. The actual settings have been preserved — the crisp blond wood paneling we recognized from “The Lives of Others” or the TV series “Weissensee;” the chairs where suspects were asked to sit on their hands,  the medals awarded to the patriot-inquisitors, etc.

If every knock on the door was a threat to the mid-century Berliner, that’s hardly the case for the modern tourist. Now it’s the sound of room service, or one’s clean laundry returning. Our hotel, the i31 (named for its address on Invalidenstrasse) goes ‘way beyond offering the typical complimentary shampoo or sewing kit.  With a deposit, you can borrow, cost-free, their pair of electric motor scooters, or an actual sub-compact car.   And every room comes with the free use of a dedicated smartphone, with local information pre-loaded.  I found this particularly “handy”, as my plan to buy a European SIM card for temporary use was thwarted by recent changes in security regulations. 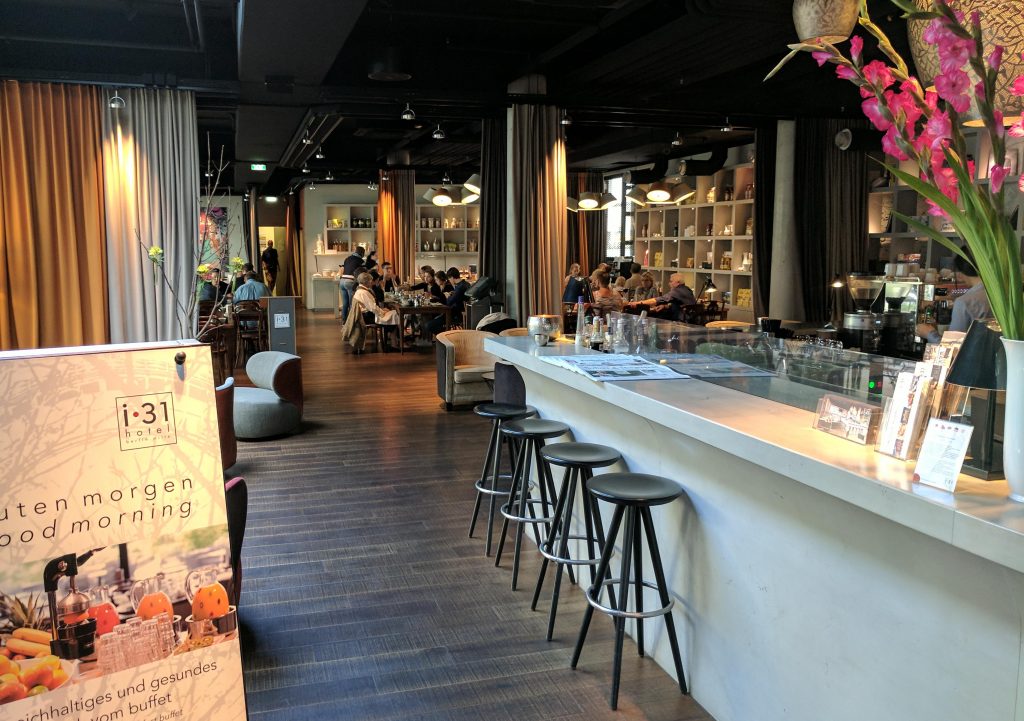 In many European hotels, the bar and reception functions have begun to merge.

Before leaving, one more kind of monument needs mentioning, a cross between the art and documentation mentioned above, between enormity and individuality: Stolpersteine, the stumbling-stones that appear now across Europe but clustered in places like Berlin.  Each brass square bears the name, at least, of someone who was taken away, and it is placed at his or her last voluntary dwelling or place of work. 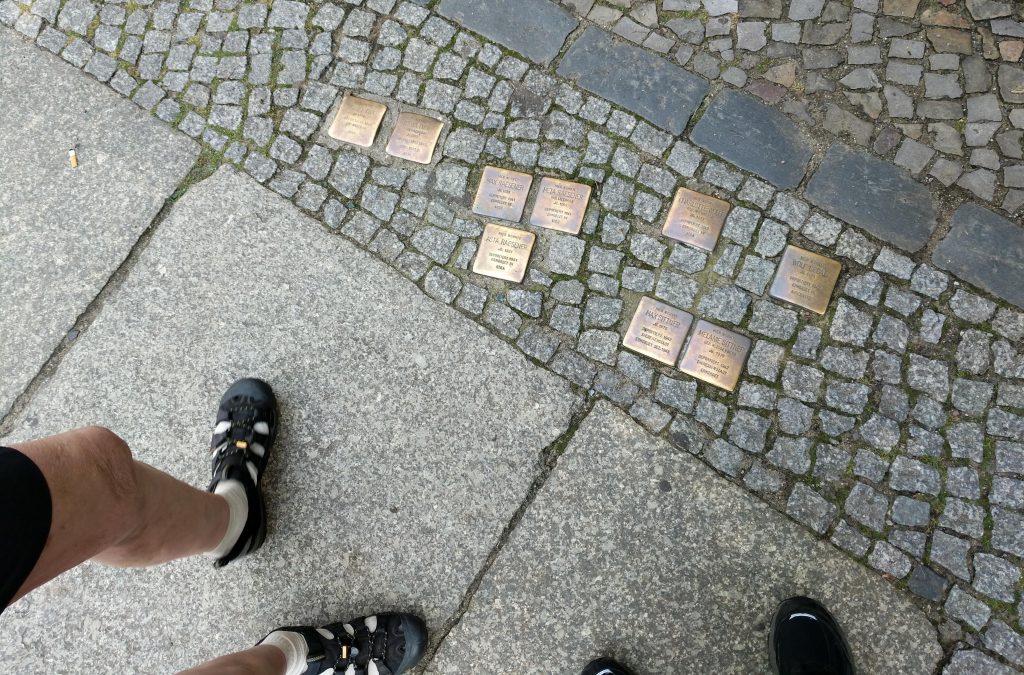 There are, at a recent count, at least 40,000 of these, each (or sometimes, as here, each little group) with a poignant story to tell. Those stories need to be heard, in a world where many are eager to make the same mistakes that Germany once learned from. (In the city of Hagen, a group of students are literally making stories heard, by linking them to geospatial data, allowing smartphone users access to written or recorded information.)